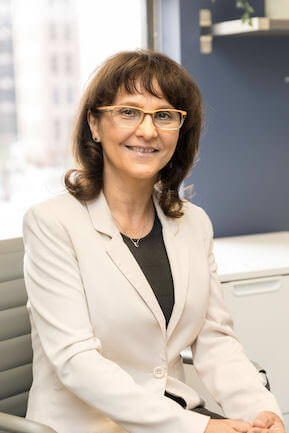 Marlena joined The Robert Weiler Company in 2016 as an administrative and marketing assistant. She provides marketing and administrative support for all the agents’ leases and sales transactions. After a major renovation of our office in 2022, Marlena relocated her work area to the front desk where she has become the friendly face of the company as you walk through our doors. With this new seat comes the additional responsibilities of welcoming clients, calls, managing mail and deliveries, and general oversight of the conference and lobby areas.

Originally from the city of Koronowo, Poland, Marlena came to The Robert Weiler Company with experience in local government, project management, financial control, public relations, marketing, business ownership, and even the medical field as a nurse. Prior to joining The Robert Weiler Company, Marlena worked for seven years in the District Office of Bydgoszcz, Poland as a Director of the Department of Development and European Funds.

Marlena is well educated with multiple degrees from varying fields that she earned while living in Poland. She earned an accounting degree, and a Bachelor’s and Master’s degrees in Economic Policy and Strategy, all from the Economic University. She also earned degrees in Internal Auditing and Financial Control in the Public Sector at SGH Warsaw School of Economics and another degree in Public Relations at the WSG University of Economy.

Marlena has been a resident of Central Ohio for five years and has especially enjoyed being involved with her son’s family. She enjoys spending time with her grandchildren, Olivia and Weston. She is also closely involved in supporting the local Polish community.