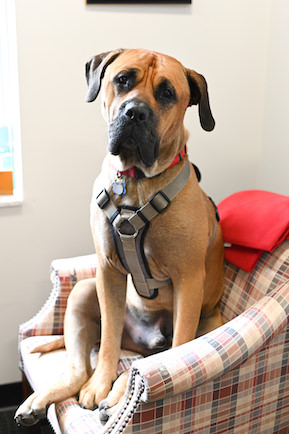 Meet the Robert Weiler Company’s newest associate who is especially happy to support Goodale Park and all of its beautiful trees! Buddy Weiler is the youngest addition to the company at a mere 2 years old (or 14 in dog years). He partnered with Jim Weiler in early 2022 from his previous residency at the Columbus Humane Society to transition to his current role as Chief Support Officer. He is an integral part of the company and can be seen working hard throughout the office greeting visitors, tagging along in important meetings, or sleeping on Bob’s couch. In his free time, he enjoys carrying around stuffed animals and eating treats of all kinds. He identifies as a mastiff, but he’s not sure what type.