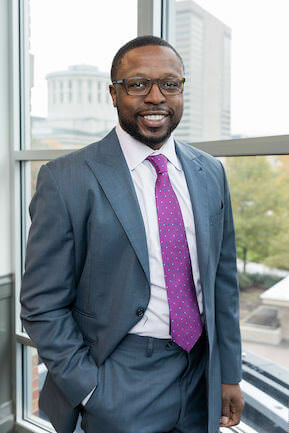 Michael Doss was born and raised in Canton, Ohio, the Pro Football Hall of Fame City. He played football while in High School and won two state championships and one national championship as a standout safety at Canton McKinley High School. His natural ability along with his incredible work ethic and passion for the game led him to earn a full scholarship to The Ohio State University. While playing at this prestigious school, he became a four-year letterman, three-time All-American, Big Ten Defensive Player of the Year, Fiesta Bowl MVP, and again a National Champion. After his senior year, Michael was drafted into the National Football League by the Indianapolis Colts under his former coach and current mentor, Tony Dungy. He went on to win a Super Bowl with this team alongside the great Payton Manning. His NFL career continued for several more years. After he retired, he learned that his championship pedigree could be translated into the world of business.

Mike decided to work in the field of medical sales working for several global companies representing a multitude of orthopedic reconstructive products, sports medicine, biologics, and various surgical products for the likes of Depuy, a Johnson and Johnson company and Zimmer-Biomet, an innovative orthopedic medical device manufacturer. He became known for his consistency and reliability in meeting or exceeding sales goals by building strong relationships with key influencers and decision-makers. He was a top performer year after year achieving the President’s Club award several times at both companies over his 10-year career. After achieving high levels of success at multiple companies he returned to The Ohio State University where he earned his master’s degree in Business and Operational Excellence. After accomplishing all this, Michael decided to take on a new challenge by getting his real estate license and transitioning his career into commercial and residential real estate. He started working for The Robert Weiler Company several years ago, where he is once again utilizing his championship mindset and strong work ethic to bring personal success for himself, his wife and 3 daughters, as well as his company.