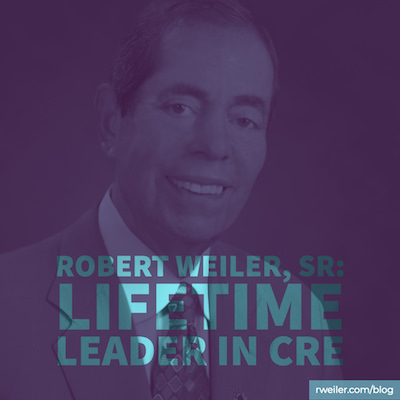 Each year, Columbus Business First recognizes industry executives who stand at the forefront of the Central Ohio business by embodying exemplary leadership qualities. This year, Columbus Business First chose Robert “Bob” Weiler as an honoree for the C-Suite Lifetime Achievement Award 2020! The 2020 awards and honorees are especially significant due to the changing landscape of business worldwide because of the coronavirus pandemic.

During times of crisis, we look to our leaders for guidance, reassurance, and security. As Chairman of the Board for The Robert Weiler Company, Bob strives to be the sounding board and safety net for his company and its employees. Bob told Columbus Business First that the most important lessons he learned during this time are positive communication and, above all else, health.

As a community and business leader, Bob has been an integral part of Columbus, Ohio commercial real estate development for decades. From suburban communities encompassing condos and apartments to parks, malls, and Downtown establishments, The Robert Weiler Company continues to look for and thrive in changing landscapes – the specialty of spotting land where there is growing infrastructure and turning it into a usable development for the community.

As anyone on The Robert Weiler Company team will tell you, Bob is heavily involved in the strategy and decision-making of the company. He always makes time for personal connections both inside and outside of the office. Bob is also known in the community for his numerous charitable pursuits, including, but not limited to, the Columbus Ohio School Board, United Way, Pilot Dogs Inc., and the “I Know I Can” Scholarship Fund.

Bob continues to put his fingerprint on the Columbus community, making recent headlines for his support of free ridership on the Central Ohio Transportation Authority system, as well as his daily walks around his neighborhood during the pandemic in which he creates clever riddles for his brother about their past. The Robert Weiler Company couldn’t be prouder of Bob Weiler!