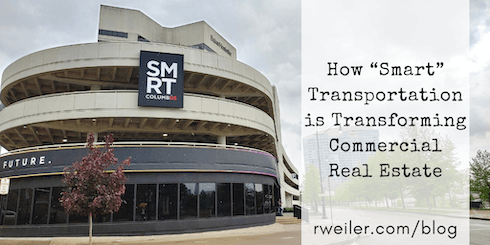 In March 2020, Mass Transit magazine (a business-to-business transit publication) featured a piece that was good news for Central Ohio residents. The article reaffirmed what a growing number of people have come to accept as a matter of course: exciting new transportation initiatives are transforming commercial real estate.

So, what was the good news?

The ridership uptick is more than an encouraging snapshot of Central Ohio transit. It’s a trend unfolding around the world, and it’s having a ripple effect on how we live, work, and play. In the decades ahead, these trends may profoundly alter how and where commercial real estate sets up shop.

That’s because these more traditional mass transit alternatives (buses, commuter rail, light rail, etc.) are coming online, along with a host of other developments. Trending factors include:

Related Article: Understand the “live-work-play” hybrid with our complete investors guide to mixed-use properties, and discover how the sector has been propelled by better, faster, and more efficient transportation systems.

Buckle Up for Change

What’s increasingly clear is the change that is underway. There is a shift from a car-dependent hub-and-spoke arrangement of global cities with massive interstate/motorway arteries running through them. Suburbs, and around them in gigantic multilane perimeter roads, are yesterday’s news. Already, according to an influential trend report by the Urban Land Institute and PwC, 80 percent of respondents said mobility changes play a role in their investment-making decisions.

At the granular level, we may need to fundamentally rethink how and where commercial real estate sets up shop. For starters, it might mean:

*Already, in the current COVID-19 crisis, drone deliveries are skyrocketing, part of what’s known as the “micro-fulfillment” economy. In the not too distant future, commercial real estate developers would be wise to advertise their “drone acceptance policies.”

For commercial real estate developers, mixed-use amenities will have to change, too. That’s because as important as access to mass transit and last-mile commuting will be (and providing it will drive value), a growing number of back-to-city Baby Boomers (ages 56-74) and their Millennial children (ages 25-40) are choosing to work from home.

For Boomers nearing retirement, working from home allows for a lower stress employment solution. Or, if they have already retired, part-time work can be done from home, too, as part of a second career. Tech-savvy Millennials, meanwhile, are eager to embrace a more measured work-life balance while lowering their carbon footprint. Due to these generational trends, telecommuting has increased by roughly 115 percent from 2005 to 2015. According to the US Bureau of Labor Statistics, telecommuters make up 16 percent of the US workforce.

As such, a growing number of people ranging from their 20s to their 70s desire walkability in their neighborhoods. Banks, grocery stores, movie theatres, restaurants, bars, office buildings, and entertainment venues must think about these shifting trends. Increasingly, mixed-use buildings must incorporate these amenities in their footprint if they are to attract, retain, and engage a wide swath of the US population. For commercial real estate owners, simply touting your proximity to traditional mass transit may no longer be enough.

The Problem of Prediction

While it’s easy to look back, futurists and historians alike remind us that predictions of what’s to come are always tricky – even when those predictions are based on well-established facts. However, it’s important to note that the smart transportation trends observed in the US and abroad are already occurring. And for the foreseeable future, planning for that smarter, more distributed, greener, cleaner, and more localized city (and suburb) of tomorrow is paramount.

Today, The Robert Weiler Company is at the forefront of urban and suburban transition with the following projects:

So, we may not all be clamoring for flying car docking ports at our office buildings or shopping centers. And perhaps the future drone economy may be overpromised as fears of a cluttered airspace mount.

What is clear is that small stories like the one that splashed on Mass Transit magazine on March 6, and the ripple effect these types of transportation changes herald, are just the beginning. At The Robert Weiler Company, we’re excited about the future of transportation in Columbus, Ohio and beyond. That’s why we’re invested in several developments that will mark a new beginning for our community and commercial real estate.

At The Robert Weiler Company, a full-service commercial real estate and appraisal firm, we’ve been at the forefront of some of the most notable properties in Columbus, OH, and throughout Central Ohio since 1938. Since that time, a lot has changed. Back then, Columbus was home to some 300,000 people. Highway-dependent suburbs and office parks did not yet exist, and the latest in-car innovation from Buick was the car radio.

Consider it “smart” business to plan ahead. Call 614-221-4286 to get expert advice from The Robert Weiler Company, and uncover the perfect commercial real estate investment opportunity for you!