The Intel About Intel’s Columbus, OH Region Move (and Why Your Business Can Flourish Here, Too) 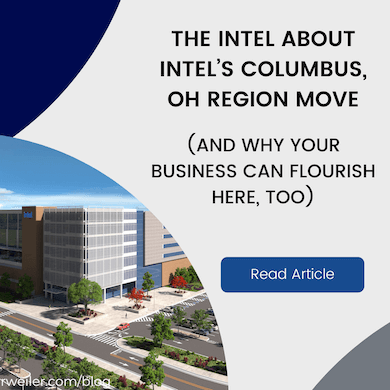 What’s so special about living landlocked in this part of the US? Residents of Greater Columbus, Ohio may rattle off a list that includes: friendly neighborhoods, down-to-earth people, stress-free rural living juxtaposed with affordable downtown living, vigorous four seasons, and yes, that famous Midwestern humility. But proximity to a new Intel Corporation fabrication plant whose construction might one day ease future global chip shortages might be another reason to love our region.

The groundbreaking for the $20 billion facility is slated to begin later this year and is expected to open by the end of 2025. That’s about 36 months to go, or a little more than three years, if you’re keeping score.

As Ohio Governor Mike DeWine is apt to point out, Intel, headquartered in Santa Clara, California, with 2021 revenue of $79 billion, could have chosen practically anywhere to build this mega plant. But Intel selecting Ohio – specifically Greater Columbus – says something significant about this special place we call home. Ditto for Google and Meta (formerly Facebook) too, as each company has opened data centers in New Albany within the last five years.

Whether most non-Midwesterners realize it, Central Ohio and Greater Columbus Ohio sit at one of America’s (and thus, the world’s) most important crossroads. The intersection of I-70 and I-71 isn’t just the meeting of two concrete super roads; it is a critical distribution point within 500 miles of 60 percent of the nation’s GDP!

Anyone who has counted Columbus, Ohio as “flyover country” or part of the frozen Rust Belt in perpetual decline is making a colossal mistake for some of the following reasons:

“The Silicon Valley of the Midwest”

While it’s unclear when this moniker gained traction, a quick Googling suggests a 2016 Forbes article was a big help. Similar terms include “Silicon Prairie.” Take your pick. But the reality is that Ohio and the Greater Columbus area have long been a mainstay of technological innovation and, certainly, the precursor to the modern digital age. For example, did you know Dayton, Ohio was the computational capital of America in the 1950s and 1960s? Or are you aware that the first text message and email were sent from Columbus, Ohio? (To be fair, we only discovered these fun facts while performing research for this article.)

It’s likely that President Joe Biden didn’t know these tidbits either when he visited for the recent groundbreaking event in September 2022. But he was correct when he characterized the importance of the plant’s construction; he noted that despite being the world leader in chip design, the United States produces barely 10 percent of those chips. The soon-to-be-built Intel plant will increase those numbers significantly.

But Ohio’s history of innovation isn’t something new. Instead, it goes back to the State’s start, carved out of land known as the Northwest Territory in the late 18th century. Imbued with a pioneering spirit and adventurism, that stock eventually yielded numerous technological achievements. Consider these innovators hailing from the Buckeye State:

Also, companies such as Galion Manufacturing and Huber Manufacturing (both located in Galion, Ohio) made their mark by cranking out machinery patents at a breakneck pace. Likewise, when it came to road-building machines, Ohio was hard to beat as plants built dragline excavating shovels and early American-made road graders and road rollers. By the 1940s, Ohio was home to the nation’s largest concentration of engineers outside Pennsylvania and New York.

In the 21st century, Ohio, and specifically the Greater Columbus area, continued to build on this impressive legacy, paving the way for its current silicon success. Nestlé, the world’s largest food manufacturer, has continually invested in Ohio. In 2015, the company opened a $50 million research and development center in Solon, and in 2016, it spent another $31 million to expand its Quality Assurance Center in Dublin. And when it comes to the global stage, Ohio doesn’t disappoint with some 3,500 international brands representing 45 countries. Brazilian-based Valgroup and its US subsidiary, Valfirm USA, is just one example.

The backbone of this competitive edge rests with the State’s advantageous geographic position, yes, but also in its institutions. Ohio, today, possesses the nation’s third-largest manufacturing workforce and boasts 80 engineering programs from more than 27 colleges and universities. Add to that the fact that there’s a growing trend of Millennials forgoing big city (coastal) life in favor of more reasonably priced smaller cities like Columbus, Ohio (and others throughout the State). It’s clear that Ohio’s most innovative days lie ahead.

Why Companies Should Consider a Move to Columbus, Ohio

For companies looking to set down new roots or for startups looking to expand, Columbus really is the place to be. One of the biggest reasons for that is that other companies have already taken those pioneering first steps, laying the groundwork for future success.

This isn’t a trivial observation. Columbus, especially for a city of its size, boasts a diverse mix of companies, large and small. It’s this type of career spread that stands to attract yet more newcomers, feeding and encouraging upwardly mobile growth for decades to come. Some of the largest brands include:

Startups, too, are very much part of the fabric of this city with CoverMyMeds, Root Insurance and Olive being three recent examples of having achieved unicorn status with $1B+ valuation. And how do such startups fill their talent pool? Simple. They pull from the city’s well-educated tech-aware workforce — a workforce surrounded by some 134,000 college-aged students.

Moreover, the area’s biotech and healthcare industries account for more than 45,000 jobs. That includes positions in hospitals, medical supply and research centers like Nationwide Children’s Hospital (NCH) and The Wexner Medical Center at The Ohio State University. Logistics and distribution are yet another area where Columbus excels, with nearly 5,000 businesses. E-commerce brands include: Zulily, Dollar Shave Club, lululemon, and Hims – employing more than 90,000 workers. In fact, supply chain and logistics management training are par for the course at many area universities and colleges.

Thus, Columbus is far from a “cash-crop” city. It is a diverse and still-diversifying region that continues to punch well above its weight. In fact, with a 2010-2020 population growth rate of 12.5%, metro Columbus beat the proverbial pants off the Midwest region as a whole. Why? In short, the following are just four examples of aspects that added to the region’s appeal:

Think cities like Austin, Denver, and Raleigh, NC are better? Think again. In the last decade or so, it’s become clear that Columbus too, very much plays in this “inland appeal.”

Even The New York Times has sung Columbus’ praise, ranking the “Arch City” in the top 52 places to visit, noting the city’s riverfront and downtown, as well as being a “model for the future of innovative urban transportation” as it embeds smart technology throughout city life.

Speaking of smart technology, this is exactly why Intel’s addition to the Columbus landscape makes so much sense and builds on this historic tradition of innovation and growth.

While it’s true that idealists predict Intel’s existence will help spawn the growth of an additional 25-30 companies spread across the area. It’s also about the vibe and energy Intel will bring and various harder-to-measure metrics. One will be venture capital interest ­— not the exact dollar figure (that’s easy to measure) but the number of venture capitalists that in the later 2020s and beyond will find themselves inspired by what’s happening out here in the prairie.

Who will be the next millionaire or billionaire venture capitalist that sets their sights on our city just as Mark Kvamme, a partner at Drive Capital, did in 2011? From the other end of the spectrum (but closely intertwined), how will Intel’s psychological footprint impact our burgeoning startup environment? How will Intel add to our culture of “serial entrepreneurship,” to borrow a phrase from Nathan Zanzig in his excellent piece, “The Rise and Future of the Columbus Startup Ecosystem?” Like CompuServe in the 1980s, the first major U.S. online service provider, could Intel’s presence be the spark that ignites a new generation of innovation enthusiasts right in our backyard?

What Intel Means for the Future of Columbus and Central Ohio 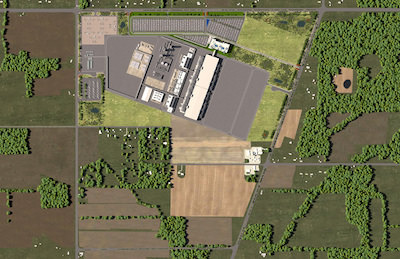 Already, Intel has committed $100 million to work with Ohio’s institutions of higher learning. That’s precisely the kind of initiative needed if the local talent pipeline continues to fill this growing demand from Intel and future companies not yet founded or even dreamt.

This brings us back to President Biden and singling out Intel’s new plant in his 2022 State of the Union Address. The facility is a critical next step in domestic chip manufacturing and the possible prevention of chip shortages in the future (an unacceptable stumbling block for the world’s digital economy). And he was spot on when he so eloquently captured the poetry of the moment:

“If you travel 20 miles east of Columbus, Ohio, you’ll find a thousand empty acres of land,” Biden said. “It won’t look like much, but if you stop and look closely, you’ll see a field of dreams, the ground on which America’s future will be built.”

From the first pioneers and planes to pixels on a screen, Greater Columbus and Ohio at large will remain a place where those dreams come true.

Consult with a Commercial Real Estate Broker in Columbus, Ohio

At The Robert Weiler Company, we believe that Intel will stimulate a new phase of tech innovation in our region. And, we have the experience, with nearly 85 years as a full-service commercial real estate brokerage, appraisal, development, consulting, and property management firm. Our belief isn’t pie-in-the-sky Midwestern optimism. Instead, our aspirations for Central Ohio are rooted in history and contemporary facts.

We look forward to the digital transformation occurring in our backyard and guiding new business investments into our community. If you are interested in the commercial real estate market in Columbus, Ohio and beyond, call us at 614-221-4286. Find out how we can leverage our industry leadership and local area knowledge to drive your commercial real estate investment ROI.