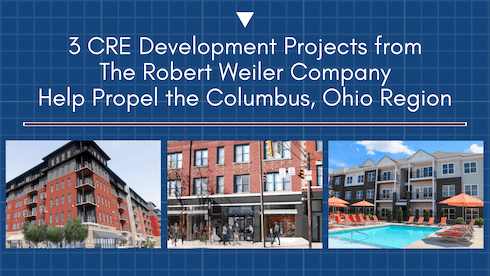 As a commercial real estate brokerage in Columbus, Ohio, we know that our city’s population of 900,000 doesn’t rival the country’s major metropolitan areas. Our great urban jungle in the heart of the Midwest doesn’t even make the top 10.

But Columbus, Ohio’s modest city size belies the fact that when you include its suburban, exurban, and near-rural outer lands, it’s a thriving region of a much larger construct that’s as diverse and as intricate as any other larger city on the map. The greater Columbus, Ohio area is home to 2.1 million people, spread out over 4,797 square miles.

Across those miles, there’s been a fascinating rethink in the last 20 years over how those urban and suburban/exurban communities interrelate. No longer are the suburbs thriving at the expense of the urban core. Instead, the proliferation of mixed-use properties, affordable housing, and planned “livable communities” has cross-pollinated both. Look at our commercial real estate brokerage properties for sale to see the distinct listings from around the Columbus region.

Below are 3 of our most prominent examples from 2021.

Perhaps the most impressive planning initiative in Greater Columbus is “The City” project. Conceived in 2017, the six-story mixed-use complex is at the heart of the redeveloped University City Shopping Center just north of The Ohio State University. The residents who call the mixed-use property’s 266 units home enjoy luxury living with urban amenities that include walking distance to some of Columbus’ most trendy neighborhoods. Extras such as a rooftop deck and custom hammocks create a high-end atmosphere that will attract young professionals.

According to The Ohio State University website, those neighborhoods include:

Victorian Village/Italian Village – is located southeast of the Ohio State campus. Some of the area is accessible on foot, more by bike. As its name implies, Victorian Village comprises many old, large Victorian-style homes, along with apartment buildings and townhomes. Annual festivals like Comfest and the Italian Festival are also popular.

Short North – is a diverse hub of restaurants, shops, art galleries, boutiques, and apartment complexes. This historical area features an eclectic, urban vibe. It welcomes local visitors for events like Gallery Hop (held the first Saturday of every month), the Arnold Classic Sports Festival, and the Columbus Gay Pride Festival.

And while it would be presumptuous to say The City — a $75 million redevelopment of a 1961 shopping center — is the fulcrum to all these trendy spots, it is fair to say that its existence fits nicely with the area’s evolving urban/suburban character. 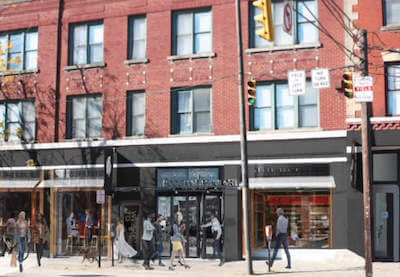 Not far from “The City,” a Short North mixed-use building also rose from a rehabilitated spot, which once included the former Flower Child vintage shop. (Don’t worry, the iconic clothing and jewelry retailer moved to Italian Village and continues to thrive.) Located at 989-997 N. High St., near the intersection with Starr Avenue, the three-story mixed-use apartment complex includes 21 apartments and about 8,000 square feet of retail space on the ground floor. The apartments for lease are market rate and feature a mix of studios and one-bedroom units.

A restaurant and a bar tenant have already signed a commercial lease for the building. And through ongoing negotiations, another tenant is slated to occupy the remaining retail space for lease, though it hasn’t been finalized as of this update. As noted in The City project, the Short North is the perfect location for such an endeavor. That’s because the Short North itself is a community that’s arisen from more difficult times.

As long-time residents know, the Short North Arts District neighborhood was once a rough area consisting of deserted, derelict buildings with boarded-up windows. Vacancy rates were high, and the newly built Greater Columbus Convention Center was beginning to attract attention. In the 1960s, the stretch of High Street that helped give Columbus some positive national press was known to residents as the “Near Northside.” The local police labeled the area the “Short North,” being that the neighborhood was north of downtown and short, as in just shy of, The Ohio State University campus. 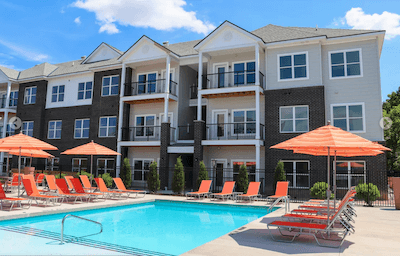 In Whitehall, an independent city about 7 miles east of the state capital, the Broadwood Apartment complex is located. Unlike other projects on this list, the housing here is more townhouse in style and features 96 units contained in four apartment buildings. Thirty-two of the units will have one bedroom and one bath, 12 will have two bedrooms and one bath, and 52 will have two bedrooms and two baths. Before its construction, the land was primarily vacant, with a small office building on site.

As part of a $10 million project, the mixed-use development (the first in Whitehall in several years) was built to suit Starbucks out front. The location was deliberately chosen for its prime spot along the East Broad Street corridor. The area includes a growing community of restaurants, grocers, and nearby, a big box Target, suggesting that one type of business model need not have to out-compete one another.

Combined with a convenient bus line to Downtown Columbus, even the old car-suburbs paradigm is being rewritten.

Despite the challenges of 2021, this past year was essentially no different from a commercial real estate brokerage or development perspective. Exciting trends that began decades ago continued unabated.

In some cases, the current economic climate accelerated that growth. People were eager to ditch their cars and return to more urban-like living with dining, arts, and entertainment amenities within walking or mass-transit distance.

As we approach the end of the year, The Robert Weiler Company, a full-service commercial real estate brokerage and appraisal firm with 80+ years in the business, wanted to take this opportunity to provide a bit of a retrospective. The three CRE development projects mentioned above are our part in transforming Greater Columbus, Ohio for the better. Whether it’s property management services, commercial appraisal, commercial development, or buying and selling commercial real estate (including mixed-use property for sale), the good-hearted folks at The Robert Weiler Company have your needs covered. Here’s to a new year where we all strive to continue giving back to our beautiful and historic Discovery City.

We look forward to hearing from you in 2022! Get in touch about your commercial real estate brokerage needs or CRE development project plans by calling us at 614-221-4286.