6 Tips When Buying Commercial Land for Sale in Columbus, Ohio 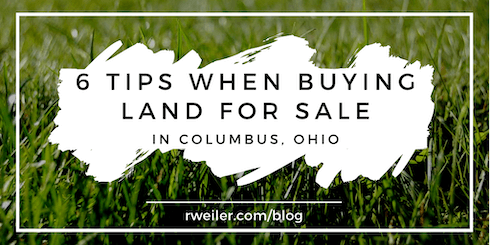 Just as farmers select the types of crops to grow and where to locate them, buying commercial land for sale in Columbus, Ohio requires similar forethought. Because a property looks great doesn’t mean all legal entanglements have been resolved, or there aren’t unforeseen challenges. In short, don’t let the fervor of early spring and the exhilaration of a new beginning blind you to property shortcomings.

Since 1830, the U.S. Census Bureau has never recorded a Columbus, Ohio population decrease. And for the last 30 years, the city has achieved double-digit population gains – a hard feat in the urbanized and industrialized Midwest. That means vacant downtown Columbus real estate is rare. But it also means suburban and rural areas are waiting to be discovered, improved, and purchased! Take the following four tips into consideration before you begin searching for commercial land.

Why Commercial Land For Sale in Columbus, Ohio is the Smart Choice:

Because of the incredible economic growth over the last few years, Columbus is one of the most sought-after locations to buy commercial land for sale. Did you know that 47 percent of North America’s population is situated within a 500-mile radius of Columbus, Ohio? That’s why many companies are taking advantage of the opportunity to buy land in the Columbus region.

These businesses illustrate only a handful of the many outstanding commercial real estate development projects in the Columbus region. So, that begs the question: Why wouldn’t you want to buy land for sale in Columbus, Ohio?

Ready to Buy Land in Ohio?

For 80 years, The Robert Weiler Company has worked hard at redefining the meaning of service. To us, “service” is more than a word – it’s a drive to give our customers the information they need when they need it. Any one of our talented and dedicated land brokers are eager to help you realize your dreams of owning commercial land for sale in Columbus, Ohio. We look forward to placing the first shovels in the ground and cutting that ribbon! Call us at 614-221-4286 or fill out our “contact” form today.