From City Center to HighPoint: Always the Best Retail Locations for Rent in Columbus, Ohio 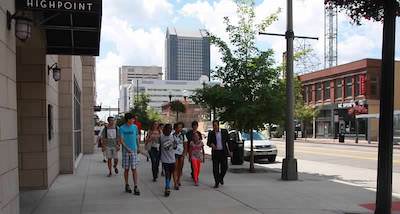 2019 UPDATE: While this blog post focusing on retail locations for rent in Columbus, Ohio was written a while back, the retail sector has remained red-hot despite the rise of online sales. New and established retailers can find success in our wonderful city because of two powerful reasons. Find out why (and check out three incredible featured properties) in our latest blog post on the resurgence of retail space for lease in Columbus, Ohio. Not ready to sign a lease? No problem! You will still gain valuable insight from that post if you’re looking for short-term retail space available.

Downtown Columbus is full of new parks and upscale housing, but what about retail locations for rent in Columbus, Ohio? For those looking to invest in commercial real estate, all of the new developments in Columbus are sure to entice you. After all, office space is 60% cheaper in Columbus, as compared to the Big Apple; so why wouldn’t you want to open up shop here?

Downtown Columbus has been the focus of a massive renovation over the last decade. Columbus has seen success both economically and socially; however, it has also gone through its rough times, especially when it came to shopping and residential property. Today, downtown is once again a hot spot, but what led to the success? And how can you get in on the action?

Columbus City Center – or City Center – was the nucleus for Central Ohio’s shoppers. If you were purchasing a gift or buying a new pair of pants in the 1990s and early 2000s, you were likely headed to City Center. After all, City Center has the most sought-after retail locations for rent on the map. However, the allure of this shopping haven was replaced with new destinations in the suburbs. Developers simply disregarded Columbus as a place to build new shopping malls. For many years, neglect wore on the City Center, and residents and developers alike forgot about it. Fortunately, the heart of Downtown Columbus beats again with all of the recent renovations – especially when it comes to the available retail space for rent Columbus, Ohio has to offer.

HighPoint on Columbus Commons – Revitalization at its Finest

How did Columbus revive the beat of its heart, Downtown? It all started with HighPoint on Columbus Commons. This Columbus, Ohio real estate development project, one of the largest apartment developments to open in Ohio in 2013, has two additional buildings and 22,000 feet of retail rental space.

With that said, there are still two available retail locations for rent in Downtown Columbus. And with the population doubled from what it was 10 years ago, prospective tenants are begging for the residential space.

There will be available retail space of 22,000 square feet! Now, what does that mean?

How can you take advantage of the remaining retail space available? Since Columbus’s very own commercial property broker and developer, The Robert Weiler Company, has been spearheading HighPoint on Columbus Commons, you can call 614-221-4286 for more details. But hurry – with such fast-moving retail space for rent, you will want to move swiftly on this opportunity!