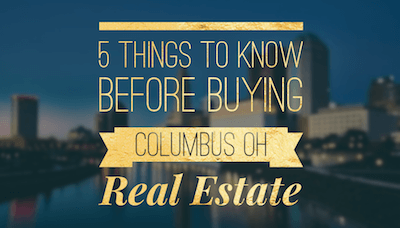 Thinking about relocating? You’d be in for a great life ahead if you decide to buy Columbus OH real estate. Why is that, you ask?

Columbus OH is one of the fastest-growing major metropolitan areas in the U.S. And it’s celebrated as the second strongest metro in the U.S. for job creation. Below are several quick facts about Columbus, Ohio:

Where else can you see those kinds of statistics? Nowhere but Columbus, Ohio!

Whether you are moving the whole family or looking to make a business investment, it’s important to understand the ins and outs of where you are purchasing Columbus, Ohio real estate. At The Robert Weiler Company, we are not only a recognized realtor in Columbus, Ohio; we’re also lifers here, in our great city. And we understand that you’re looking to learn more than just statistics – although the points above are pretty stellar!

We think that makes us your go-to experts in finding what you need to know before investing in real estate in Columbus Ohio. We also can help you avoid 7 mistakes when investing in Ohio real estate.

Below is our list of the top 5 things you need to know about Columbus, Ohio before buying real estate or relocating your business:

Did you hear that Columbus was named the best city to make your mark by Forbes? Everything from home sales to job opportunities makes it the ideal place to settle down.

In Columbus, it’s easy to get your feet on the ground and start running. In fact, young professionals are moving here at rapid speeds because they know it’s a great place to start their lives. And as someone considering to buy Columbus OH real estate – whether it’s a commercial property for sale or a home – that means you’ll have a stable economy and a great population giving back.

The Columbus Region is home to over 50 colleges and universities! There is a total enrollment of nearly 136,000 college and graduate students and more than 20,000 annual graduates. What does this mean?

Ohio State University is one of the largest universities in the U.S.; you’ll never miss out on a thing when you’re in town. (Go Buckeyes!)

3- Cost of Living: It’s More Than Dollars and Cents

Columbus OH tops the list of places where your buck can stretch the farthest. The cost of living in the Columbus Region is lower than the national average; it’s also lower than the state of Ohio. There’s more than just that to consider…

4- Working in Columbus: The Ideal Situation

In Columbus, Ohio, there are over 1 million workforce contributors. But don’t feel like you’ll be in competition for scarce jobs when you buy Columbus OH real estate; the region is one of the fastest-growing areas in the Midwest.

5- Doing Business in Columbus OH: A No Brainer

According to data from Ewing Marion Kauffman Foundation, Columbus ranks as one of the top areas for startup business activity. Why? Because the business climate in Columbus is ideal for workers and employers alike.

In Ohio, there are tax incentives for business owners that make the cost of business a no-brainer. If you are ready to purchase Columbus OH real estate and own a business, you should note that businesses in the Columbus Region benefit from:

But that’s just the tip of the iceberg! Owning and operating a business in Ohio comes with tax savings and incentives from local governments as well as resources, credits, grants, and loans for new, small, and expanding companies. Some of which include the job creation tax credit and community reinvestment tax credits.

What Are You Waiting For?

So, now that you’re convinced, who is your first call? How about The Robert Weiler Company for all of your Columbus OH real estate needs? Contact us at 614-221-4286.